Frances Perkins - Woman of Faith behind the New Deal

Frances Perkins, who would become the first woman to be a member of a cabinet in the United States, was born on 10th April, 1880 in Boston.It was a household where faith was important.She would always remember her grandmother’s advice, "Do the best you can, for it means that it's the Lord's will for you." 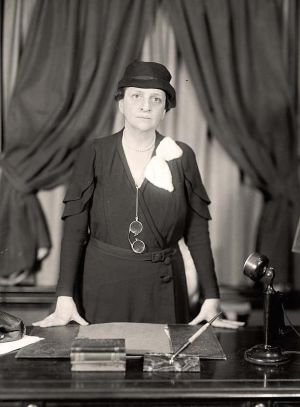 She joined the Episcopal Church in 1905, changing her name from Fannie to Frances, and the church would remain an important influence on her throughout her life. Her first prominent role was as head of the New York Consumers League, during which time a tragic fire at the Triangle Shirtwaist Factory, in which 146 people died, had a profound impact on the course of her life. She became executive secretary of the Committee on Safety of the City of New York.

Various positions in the New York State government led to her gaining the respect of many political leaders in the state, including Franklin Roosevelt, and in 1933 he appointed her as Secretary of the Department of Labor, a role she would fulfil for 12 years, longer than any other person. In the wake of the Depression, Roosevelt had promised the American people he would improve their lives, and he promised to back Frances. She herself believed that, “A government should aim to give all the people under its jurisdiction the best possible life.” The Christian faith she shared with Roosevelt formed a bond between them, and she felt that Roosevelt’s policies derived from a religious revelation, for she traced a spiritual leadership that appeared divinely inspired. "It was a revival of faith," she said.

She pushed through far reaching reforms. There was the introduction of unemployment insurance, old age pensions and the welfare programme. She oversaw the reduction of child labour in America, and legislation which reduced workplace accidents. During her term of office The Bureau of Labor Statistics became a trusted source of information and the Fair Labor Standards Act brought about the minimum wage and a basic forty hour working week, with overtime pay. The Conciliation Service gained a greater role in resolving strikes, and she dealt with many of the difficult labour questions which arose in the operation of a wartime economy.

Though her reforms were rooted in her faith and her experiences, and her determination to improve the lot of the working population, she saw the economic sense of what was being done, pointing to the multiplier benefits of undertaking public works. The Great Depression, devastating though it was, had provided the impetus for what she did. As she remarked, "Nothing else would have bumped the American people into social security except something so shocking, so terrifying, as that depression."

Frances’ life was not easy.Her husband, Paul Wilson, suffered from mental illness, and political enemies resisted her, at one point bringing impeachment proceedings. In later life, for all her earlier high office, she was not financially secure, and relied on a teaching post well into her seventies for accommodation. At the most difficult times, she would go to church each morning to help her face her ordeals. She spoke of praying for her enemies and, during her impeachment would write, “I had a sense of the Lord Jesus looking after his people and walking beside them.” As she later said, "I don't see how people who don't believe in God can go on in this world as it is today."

Towards the end of her life, she reflected, “Remember…we are only day laborers in the vineyard of the Lord. … Also remember that Christ did his greatest work of redemption when he hung helpless on the cross.” “I came to work for God, FDR and the millions of forgotten, plain, common working men. The last conversation… I had with FDR was of such a nature that I could say with the Psalmist, "My cup runneth over and surely goodness and mercy shall follow me.”

She was a Christian woman with a unique place in American history.